This ‘Glow’ makeover—released in May 2019—equips the Primeknit upper with a high-visibility treatment and a translucent stripe to the lateral profile. Integrated lacing and a coordinating heel pull provide easy on/off. Underfoot, the signature full-length Boost midsole looks to the future with a bright glow in the dark finish.

Among Kanye West‘s tweets on August 28th was a photo of two different styles of the Adidas Yeezy Boost 350 v2 that glow in the dark in two ways. One lights up in a full light green tint whereas the second version appears in more of a neon orange tone. Upon closer look, the construction of these Adidas Yeezys appears to be the “translucent” versions that feature the see-through stripe that runs along the lateral side of the shoe. Still, Kanye doesn’t provide any confirmed release date information, but it’s good to know that these glow Yeezys are in the pipeline. Which of the two are better? Buy Yeezy hyperspace in Pakistan also available Yeezy Clay, Cream white, Gid, Citrin, landmark, Butter, Static 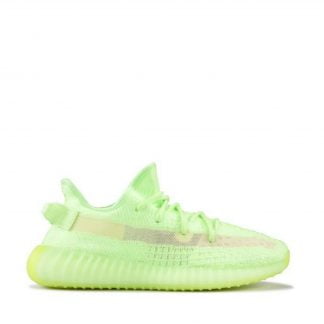